During the summer of 2021 little Brio was born into the herd. He appeared to be doing well and was often seen with his mom grazing on their large territory. However, soon after, he was seen alone and the Corolla Wild Horse Fund were alerted to the situation.
After a period of observation, it became clear that Brio was not doing well on his own and the decision was taken to remove him from the beach and bring him into the care facility at the farm.  He received much needed medical attention as it was determined that Brio had pneumonia. Brio was also very undernourished and had issues with his hind legs, which could be resolved with proper nutrition and corrective hoof trimming.
Brio was very small and immature for his age and did not seem to have developed proper social skills when it came to interacting with other horses. This alone put him at great risk of being injured or killed in the wild. But now that he’s at the farm we can safely introduce him to other horses and he will have good role models from here on out. 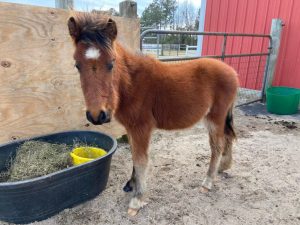 Since we rescued Brio, we are happy to report that he continues to do well! He’s finally starting to act more like a normal 8 month old colt. In the last day or two he’s started showing signs of being more aware of his surroundings and the other horses, he’s laying down and getting good, restorative sleep, and he’s been nibbling on grass. He’s figured out that humans aren’t too bad, and he really enjoys scratches and his daily walks around the farm. He will continue with his vet care, and we are pleased with his progress.
Michael Middleton Ceramics are pleased to announce that they will be providing a unique Brio pot, made with locally sourced clay and infused with Brio's tail hair. This pot, which has BRIO stamped into the base, will be on display at the up-coming CWHF Spring Open House, where it will be used to raise money for the fund. Keep following our social media for more details and videos on the creation of this beautiful piece.